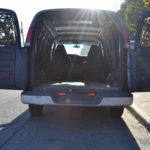 The idea behind buying a van for the trip rather than hitchhiking or depending on public transport or bicycles is that we could make it into our new (temporary) home, one that we can take with us. Another reason is because there are certain things that we wanted to take with us, and carrying them in a backpack would have been difficult. As well, after a lot of reading and discussion, we agreed that we wanted to create our own space that was just ours, over which we could have control. Thus, it needed to be adapted as much as possible. 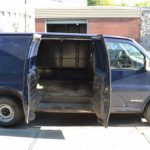 As we go through the articles, we will try to see what can be done with a van to make it the kind of alternative “habitat” that we’re looking for. The more we read, the more we see that living out of a van has advantages that we wouldn’t have living in the city. Well, actually, it is possible to live the way we want in the city, but we’re not used to that kind of life, and it’s normal to stick with what we’re used to. The needs are quite similar, even in a tiny living space, so it is important to maximize the space we have, produce energy, and reduce waste. Yeah, reducing waste, like what we put in water, what do we do with that? You know what we’re talking about: toilets.

This article is the first in a series which will show the transformation of the snail, step by step, as we make it into what we want can.

The state of the van is that it is basically empty of any contents. There is nothing but the two front seats and some plywood screwed to the bottom to serve as a floor. The trip back home was rather a noisy one; sheet metal does not make for good insulation!

As we said in our earlier post, the van, a 2002 GMC Savana model 1500 was bought at a Government of Quebec auction in Montreal last September, for $1900 ($2100 with fees and taxes). According to the paperwork, it belonged to the Governor of Quebec, with the back windows painted over and the words “Gervais Plumbing” still visible. It seems that, in a former life, the Snail was used to stash things. History isn’t telling us anything, but we imagine it to be so, and it gives us a story to tell. However, since painted windows are illegal in Quebec, it’s still a legitimate question.

But no big deal, we are going to transform it. At that time, we were still calling it the “Russian doll” because of all the extra costs hidden surprises that came after the purchase in terms of repairs needed.
The photos were taken at the “Atelier co-opératif La Patente in the Limoilou area of Quebec City, where we are working on the transformation. That’s pretty much how we got it and decided to make it into our future home.