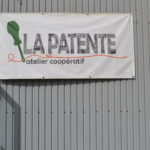 There are places we go because there is a specific goal, there are others it is by habit, then finally there are those where we go because we feel good. For me, La Patente has successively become these places over the last two years. Initially, coming out of a short carpentry training at the Center Jacques-Cartier, I wanted to keep trying to create, it was the moment when I was trying to no longer enter an office. The first results appeared, to create with his hands, to know how to answer his needs by creating, it is a gratifying feeling. With time, the same faces, we start to talk a little more, go for a drink at the end of the day, we make acquaintances, friends. A desire to create, to be surrounded by people we know, to break sometimes the diary solitude of his workshop in his garage, then we go to this place, we feel good.

La Patente is a collaborative workshop, a makerspace, meanning that it is a place where you can go to work by using the tools available. Two years ago it was the third of its kind in Quebec; there was the Fabrique starting in Sherbrooke and La Remise in Montreal, but it was the first one in the Quebec City area. It is also the biggest. Located in the old Limoilou, on the banks of the Saint-Charles river, bordering Saint-Roch, it is a workshop in the city center. It all started when friends, most of them in the community organization Velocentrix, were looking for a place for this one. Then, someone arrived with tools to give, the runaway was taken, the opportunity to have the local came and here a cooperative is mounted with a local and full of tools.

As a cooperative, it is necessary to pay 30 $ of social share to become a member of La Patente and thus to have access to all 4 workshops. A 2-hour safety training is also required before you can start working. A tour is done of the premises, an explanation of the main machines of the wood workshop, as well as an explanation of what La Patente is. Tool training is good for completely newcomers, but it is also good for those who are more experienced, who are not used to work in a group workshop.

The most frequented workshop is the carpentry area, where a dozen people can work simultaneously. There is almost everything you can expect to find to work, some more specific machines or details can also be provided by members during their work period. The workshop is divided into two main areas, one where the editing and finishing, the more manual things, then another part where the machines and dust tools (eg sandblaster) are located.

The second important workshop in terms of size is the metal workshop. Less used at the beginning of La Patente, it is more and more used, the presence of a part-time welder who can help you in your projects is really helpfull. Fashion is wood for its ease of work, the metal is little used, but the use of Patente can change this because all tools are present.

A smaller workshop, but it has regulars, is the textile workshop; Sewing machines, serger and tons of fabrics are present to help you realize your project. Some make clothes, while others finish their truck or the rest of the project started in another workshop. (A bench, it takes him cushions!).

Little used, the electronics workshop is yet there. He only asks for rehab, when we left a group was formed to work on Arduino chips. A seemingly simple technology that allows to make many interesting projects and can integrate with wood and metal creations. But there is also everything you need to make your electrical system if you make a lamp or just to repair your objects that would end up in garbage if we do not know how to fix it.

There is also a fifth workshop that we do not count, but which is the painting room. Even if you have all the tools at home, it’s rare to have an specific piece to do some work with a paint gun. Recessed in the wood workshop, a closed room away from all dust and with adequate ventilation allows you to do the perfect job.

Patente is the place of Do It Yoursel in Quebec, but it’s not just a huge space for those who already know how to do it. A range of training from knife making to creating a 3D plan can allow those less experienced to learn new skills. And this is one of the strengths of La Patente, because with its hundreds of members, it is an inexhaustible resource of knowledge that is present in the community.

On March 9 2017, La Patente inaugurated the Quebec Tool Library, after months of working as a director at La Patente, Maxence saw the light of day on this project. (We have the video of the inauguration on our Facebook page) The principle of the tools tools library we saw in this article in Toronto. This is a new branch that La Patente offers to the citizens of Quebec City. Because although most projects could be done in the wokshops of La Patente, there are some that are not exportable, for example if you make renovations in your home. Then it is possible, for $ 60 a year, to become a member of the library and to borrow hundreds of items for free. Whether tools for your work, but also camping equipment or cooking, why buy while you can borrow sharing?

Soon after 3 years that La Patente acquired its local, 3 years that the members began to do the first work and development to become a cooperative workshop. More than 2 years after the official opening of the place and the membership of more than 400 members in the cooperative, can we say what is exactly La Patente?

A cooperative, even if it is a cooperative of solidarity, is a company that meets the needs of its members, it is its mission, but its mission is also the product of sale which made it autonomous economically. The mission of La Patente is to provide a workspace to all its members in order to make accessible the creation of itself.

Volunteering is an important part of running La Patente, otherwise it would not exist. We talk about volunteering, like volunteering, but by giving our time we get a benefit. For 16 hours given to the organization, one can go a few days free in the place per month. Although advantageous, not everyone does it in this way. Because given of his time it is also a way to pass it and to transmit his knowledge. It is possible to volunteer at La Patente directly in the workshops, but also through training, repair on machines, help with collective works, help in offices, any good will is welcome. It is the strength of this organization that is also a project and a collective construction.

A social space, a meeting point

After several days of work in the premises, we can see dozens of people worked at the same time as oneself. It will be just as different profile that we can see; the young entrepreneur, the office worker who makes his home furniture, the retired professional, a group of students carrying out a school project, the person giving all his time as a volunteer or others seeking an ideal of life. At La Patente, we can meet people who want simplicity and others who have everything in double, we can find people with a complete and happy family, then others feeling alone at home. The primary mission of La Patente is to provide a workshop to all this diversity of population, it is at least the official version. But if behind this we do not find an organization that is also a social organization serving as a link, allowing a social mix, but also to allow to find an occupation when we do not know what to do? If it was a place of knowledge, but also a place for when you have less money you can learn to do it yourself to save? And if it was a place for the curious who want to understand how it works? And if it was a place that filled a daily loneliness? And if it was an incubator of new ideas and solidarity economy of tomorrow? And if it was an ecological solution to excessive consumption?

A problem of La Patente when we left was still financing. “Easy” to start; lots of good ideas, support and hopes are present, but the passage of time is more complicated to keep all this afloat. We expect the organization to have a balanced budget, but at the same time we are pleased with its social contribution to the population. Now, a real social organism, do not trade the poor, as some may do. How to progress peacefully when his personality remains to be defined? Between the NPO and cooperative status, what is the best for this organization? The Fabrique in Sherbrooke is Coop, the others we met are NPOs. How to respond adequately to all its members and their diverse profiles? Will developing activities that bring together and strengthen the community be a solution as we saw in Chicago? Does the quest for a balanced budget not bring about adequate solutions with its cooperative status, but in contradiction with its social mission?

The La Patente cooperative workshop is a must for anyone curious about the city of Quebec, an explosion of ideas can fall on us when we pass the door. A huge sharing of knowledge is present among the members and the key word between all is collaboration. Let’s work on our projects, but help us do them. Challenges await this organization, but its presence is important on the territory. Congratulations and thank you to all the Patenteux encountered during the last 2 years. The Snail would have had trouble building without La Patente!