At the time of writing the book, the subject was not yet so present in the media and still many leaders could deny it. Talking about global warming or climate change is the same thing, although we talk more about the global warming in different studies, talk about change will be a more generic term that can explain cold waves, current changes, absences or abundance of rain, etc. When we talk about climate change we often talk about the hole in the ozone layer, but basically what is it?

18 000  years ago half of the United Kingdom was under 2 km of ice, so much water was in this form that the sea level was 75 m lower. Human runes have been found in what is currently the North Sea. Earth alreday had 6 Glacial eras since the beginning. We talk a lot about the greenhouse effect, but: “there would be no life on earth, this layer of carbon dioxide and other gases can retain heat, without it the temperature on earth would be – 18 C.“

Except here, we call our era the Anthropocene, which means that it’s a moment in history when climate change is caused by human activity. While change is a normal cycle, our business has disrupted this slow process. The problem of the greenhouse effect occurs when the gases forming this layer accumulate and capture more and more heat in the Earth’s atmosphere. It must be understood that all the human activity that generates a gas emission aggravates the greenhouse effect. The energy we use is not neutral, our gas emissions come out of the normal cycle of the earth.

The interrelation of peak oil and climate change

Where the approach of Rob Hopkins is interesting is to consider together these two issues and not separately as many do. The example of the allegory of the car to explain peak oil is important because it is not when there will be no more oil that there will be problems, but well before. The increase in the price of this resource will ban the most vulnerable people first. Just think in our daily lives, how oil is important just to eat. Still a lot of people go to the supermarket to feed, without oil, the shelves will be empty if you cannot transport them.

So to fix this, subsidies rain down to keep costs low, research is done to find replacement products; hence the tar sands, shale gas, etc. However, continuing in this direction, it is climate change that is aggravated. We cannot replace oil with another product that is also more or more polluting.

«A Host of Plastic Daffodils…

While I was washing up I heard a ridiculous story on the news that I am still thinking through the implications of. The Lake District is famous at this time of year for its amazing displays of daffodils, especially thanks to Wordsworth’s poem, but the exceptionally warm winter and mild spring have meant that the daffodils have all flowered and wilted much earlier than usual, and, most importantly, before the tourists arrive. The South Lakeland Parks holiday park at Fallbarrow, on the shores of Lake Windermere, has responded by planting thousands of plastic and silk ones instead.

our guests love to see the daffodils in bloom when they come for their Easter break, but this year the flowers have been out since the middle of February. The chances are they won’t be at their best come April, so we’ve taken the decision to replace them. The fakes are high quality silk and are extremely realistic. Unless they look really hard then I don’t think many people will notice the difference.

Another example cited is that of New York City which at the time was considered to be the city with the lowest per capita CO2 emission rate of any major western city.

«This is due to the density of the house, the ease of walking, the quality of public transport and the low heating requirements of the apartments. It is therefore possible to argue that, in terms of climate change, New York is a good model of low carbon life that we would all be well advised to follow. Now let’s add Peak Oil to this mix. What will happen in New York if a power outage occurs or when the price of imported food starts to soar? New York experienced a power outage in August 2003 and although it lasted only one day, its effects were acutely felt. Although New York has a low carbon footprint, the city has little or no resilience to declining oil supplies.»

Finally, to wrap up this chapter 1 I will just highlight a diagram presented by Rob Hopkins which he himself was inspired by a site now offline, but which was held by Bryn Davidson. This scheme puts forward different solutions depending on whether one tries to treat peak oil or global warming. A third column merges the proposed solutions to take into account both issues. 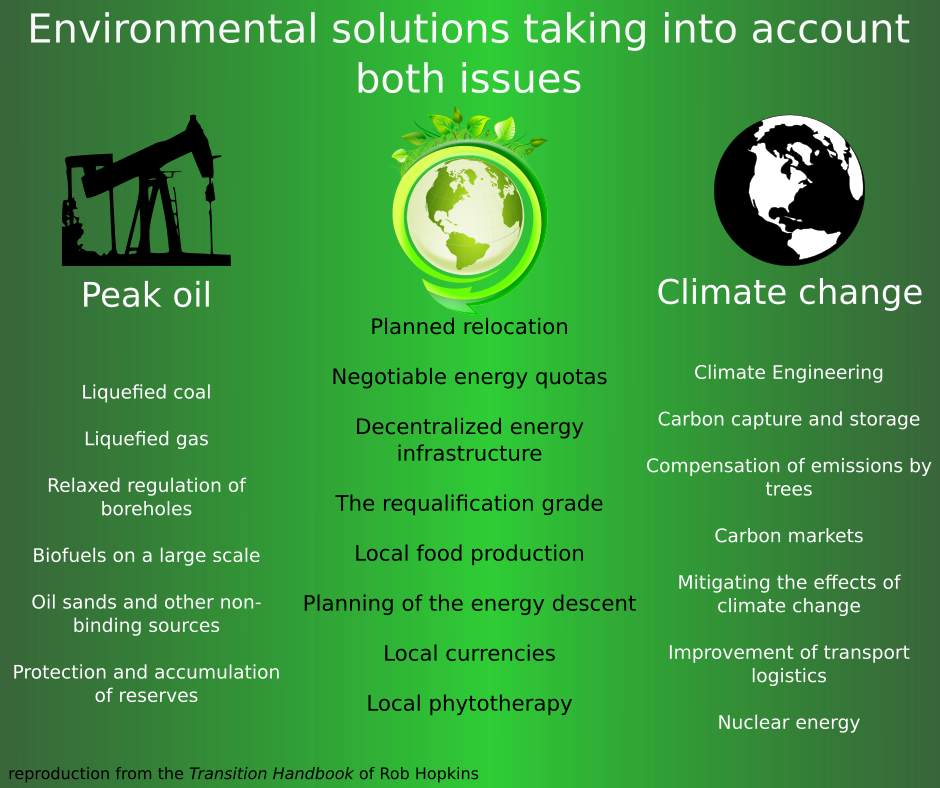