If the oil shock and climate change are the triggers for the transition movement, resilience is the proposed principle as a starting point to make a change.

«In the field of ecology, resilience refers to the ability of an ecosystem to adapt to external events (shocks) and imposed changes. […] the ability of a system to absorb disturbing change and reorganize itself by incorporating that change, while retaining essentially the same function, structure, identity, and reaction capabilities.»

If in recent years we see a green turn of our societies, we must be carefull that it is not only a pageantry. Resilient action leads to more adaptability with the environment, not solving a problem by consuming more energy. In many cities, trees are being planted to sequester carbon and promote biodiversity, which is good, but it does not help the resilience of a community. However, if we thought in terms of resilience, we would tend to make them into productive forests, which we call agroforest, we could have fruit trees.

Resilience is going beyond the concept of sustainability, it is not because a thing is viable, that it will be able to withstand a shock that would occur. Methanization of compostable materials, while creating a form of energy, is also a waste of a material that we could use on a small scale. For example, we could have composters on every corner, so when it is ready the neighborhood could enjoy it. It does not require consumption of energy and everyone can do it.

According to economist David Flemming, the benefits for a more resilient society are:

«-If any part is destroyed, the shock will not affect the whole;

-There will be a great diversity of creative solutions developed according to local circumstances;

-It will be able to meet its needs despite a significant reduction in travel and transportation;

-The infrastructures and bureaucracies of the economy at multiple levels will be replaced by alternative solutions adapted to local needs at a much lower cost.»

According to studies, three ingredients are essential for a resilient community to recover from a shock.

Diversity is the number of elements that make up a given system, the connection between them. A system that depends on several different components is more resilient than if it depends only on one. It must be local and can not come from the top, because it depends on the realities of each and what can work for one may not work for the other. 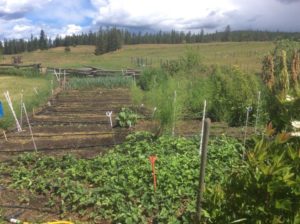 While living in Guatemala we had a period during the rainy season where it rained for several days. We lived surrounded by mountains, so that almost all the fields were sloping and the farmers only grew the traditional red beans. This monoculture imposed on the ground made it so friable that, this year we had many landslides that had serious consequences. If the fields had been more diversified, the soils would not have had the same consistency and these disasters could have been avoided.

Modularity is the way in which the components of a system are linked together. The fact of being flexible makes it possible to be also less interdependent with a source, so that a system is resilient it is necessary to look for maximum internal modularity to go as far as possible. If a shock occurs it is easier to self-organize in this case, while if the shock comes from far away and we need the entity that is affected, we are touch also. If for the manufacture of a product, my material needs to come from several local producers, it will be easier for me to solve a problem if one of them can not deliver me. While if it is my entire production that depends on one supplier I would be much more annoyed in case of failure of it.

Direct feedbacks in a resilient system are how quickly changes can affect one link in the chain. If the things I need come from close to me, a shock can quickly be seen, because we can see the direct effects on our actions. In the current system, we can not realize the effect on the environment that pesticides have, because we live far from the production of our food. If we cultivated on a more local scale we would pay more attention, because we would be directly impacted by the effects that implies.

Subsequently Rob Hopkins gives us several examples of what the city of Totnes had before and how with its different local shops it was a more resilient city. But also to answer those who would say that making these transformations would take time, he gives the example of England during the Second World War which in a few years, less than 5 years has made huge changes in its food supply. While in 1936 England imported 2/3 of its food, it had in 1944 increased its food capacity by 91%. 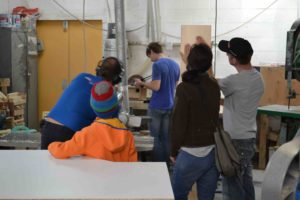 The resilience of our societies will be reach returning to a production and a local consumption maximum as possible. Going back a in learning how to make simple and respond to our daily needs, so we will not be to dependent on an assembly line at the other end of the world. It goes without saying that this is not possible for all, it would be useless to have a computer or sewing machine factory in each village, you must know how to choose a certain centralization. However, in terms of primary and vital needs, such as food or accommodation, it is important that this return to the local is done, whether it is to stop in case of shock, but also simply to return to a human scale which allows to produce according to the needs and not in quantities which leads us to the current waste.