The Walnut National Monument is located in the state of Arizona, in the middle of the desert, near the town of Flasgstaff. Archaeologists estimate about 300 dwellings, the peoples would have settled after a volcanic eruption around 1100 untill 1250. The time period inhabited is relatively short, we imagine that this place was seen as a transition site in order to move towards land easier to farm. 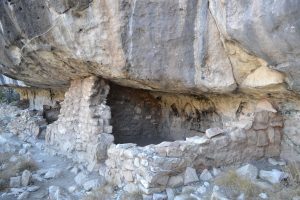 A 1.6-kilometer course that sinks 90 meters from the surface of the canyon allows us to walk along the walls of the canyon along the remains of dwellings. The archaeological research and discoveries allow us to see the evolution of these dwellings over the generations who have lived there. The Native Americans used the places where the wall had a natural recess, which allowed to have a roof already made and to ensure a seal. It only remained to build the side divisions and the front wall. An ingenious system allows you to see a ventilation downstairs to bring fresh air and a hole up to bring out the air and smoke. This allowed aeration in the summer and not suffocating in winter. 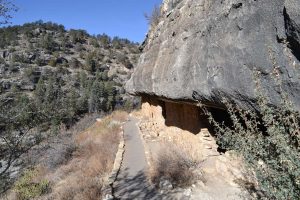 At the entrance to the signage trail, the place was vandalized. However, it should be noted that this is a vandalism that was not considered as such when it was done. During the course we learn that it was customary for tourists from the beginning of the previous century, to bring back “memories” of the places visited. You can see photos of tourists with their shovels picnicking family on the ruins of homes. Talking with the ranger, I wanted to express my astonishment on this custom of then and his first answer was to say “it is sad no? Fortunately now we have changed. “ 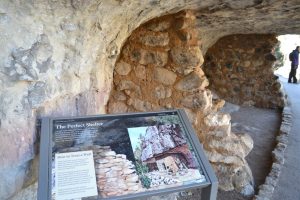 The remark I wanted to make at the beginning was my astonishment that at that time it was not considered as vandalism, that we want to bring back a memory like this one. How was it that the historical significance had not been put forward as it is now? What could have changed us like that? And yet the Ranger told me that fortunately now we were not doing that anymore.

It’s interesting to see how a normal act before has become senseless now. In the response of the Ranger there was not a thought towards what the tourists of the time could think, but a judgment of the actual man he is. What if we tried to imagine the harmless acts of today that will be a heresy tomorrow?

Does it make more sense to spend so much money on remnants of the past when you do not care for the living people now? What will think the future generations about how natural resources are so neglected? Where for reasons of lack of money, people and animals are killed or abandoned? What will future visitors of our time say by seeing how we act? “Phew, thankfully, we’ve changed! Like the tourists of 1900, we take action in our daily actions that are meaningful to us, that we no longer question. How to bring our actions to take into account the global society and the environment?