When leaving on a big trip, the choice of a vehicle is of utmost importance and that was our starting point. After looking at a few vehicles, we realized that we needed a fair bit of space, given the fact that our trek would be a long-term one. After visiting dealerships, we wanted to find a vehicle tall enough for us to stand up inside of it. As you can imagine, when the weather is bad, or just for comfort’s sake while we’re cooking, the ability to stand up and not be constantly crouching was not an option. 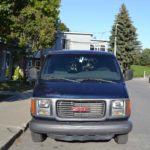 As we talked to the people around us about our plans, someone talked to us about the Government of Quebec’s auction sales, which you can find on this site. The government has certain regulations that mean that, after a certain time, (10 years for school buses), they have to be changed out. It’s also possible that the vehicle is no longer in service.

The auctions are held about every two months, alternating between Quebec City and Montreal. We decided to go to the sale in the big metropolis in September just to see how things worked. Being neither car owners nor Montrealers, the trek to the big city made for some onerous trips on Bixbi rental bikes and on the public transit system. 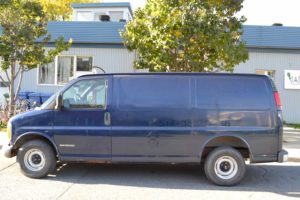 The auction site is on the northernmost tip of the Island of Montreal, in the industrial area. There are all kinds of items at the auction, but they mainly sell vehicles. (At least that was the case at the auction we went to). The sales happen on weekends. Friday night, you can see the items on sale and, on Saturday, starting at 10:00 a.m., they drive the fastest-talking men in the world around the yard, and they pitch the various items for sale.

We had a few vehicles in our line of sight but, when you don’t know how to play, the game moves quickly. However, we left with a 2002 GMC Savana!