We had visions of sun, palm trees, beaches, etc., at least that was our aim. Most of the time we would be able to say that sleeping under the stars in a place like this was idyllic. Imagining living in the van over the long term, you can imagine that we would sometimes have to actually be INSIDE the van at some inopportune moments. The sun can be a real scourge inside a metal box. For this reason, we decided to tackle the insulation of the snail as the next step in its transformation. We were thinking mostly about protection from the cold, but also the heat and noise.

Several options were open to us in terms of insulation. Polyurethane foam insulation on the walls would have been the ideal solution. You spray it on, and it foams up and hardens and stays in place. It seems that you can even nail pieces of wood into it. You nail them on and then, when it sets, you can use them as a step. The cost was high, though, around $450 for the van. That’s the price we were told. We didn’t really shop around, but it still seemed a little too expensive for us. 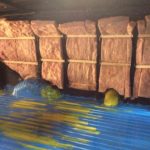 After consulting several web sites that talked about refurbishing vehicles, we opted for fibreglass and Styrofoam. Fibreglass is less expensive than polyurethane and it also has the advantage of being a better insulation from vibrations. As well, it can be easily moved around if there is need. Imagine making a hole for a pipe or for ventilation and all you have to do is push it and move it around to the desired spot. Polyurethane has to be broken up, taken off, and then sprayed again.

But when you’re insulating, there mustn’t be any holes! With the problem of having a breech in the metal of the floor on the driver’s side, a friend gave us a solution! He gave us a steel plate that Laurent was able to cut to fit the breech. After it had a coat of anti-rust paint, the plate was then riveted to the floor, and the problem was resolved. Thanks for that, Vincent!

If you have a hole like this in your undercarriage, it is important to take off all the rust and the weakened metal around it. This way, you can be sure that you are riveting the protective steel plate onto solid parts. That is also important, because once rust is present, it will continue to spread