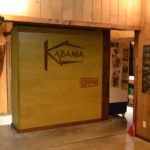 We left Quebec City on a Sunday. It was moving day for us. As of that moment, our choice was made: our house was “the snail”. A moving house to be able to go on an adventure. We registered to a Vipassana, from March 15 to 26, to start our voyage. We will come back to it later. It gave us three days.

We spent three days in Montreal, to unwind and separate our new life from the old one, with “the snail”. Also to celebrate the end of the last few weeks, which had not been the easiest. A lot of work was needed to finish the truck, prepare for the move, say goodbye to everyone, etc

On Tuesday March 14th, a week before we moved, we booked a night in an unusual accommodation. It was a Christmas gift from Audrey’s parents. We liked the concept at Kabania: to sleep in a cabin perched in a tree, in the middle of the forest. It was ideal to prepare for a 10 days meditation retreat, and to leave the city aside! 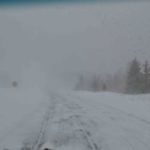 So we left Quebec City on Sunday March 12th, during the evening, at the beginning of a storm. Violent winds put the tired drivers that we were, who only wanted to rest, to the test. Because we left on Tuesday, we went for it again with an even more violent snow storm. The destination was well chosen: north of Trois-Rivières, in the forest, a place that was not the priority for snow plows. Buying a studded tires vehicle, which was a bit odd in the summertime, was ultimately not a bad idea! It was a good first test for “the snail” to see if it would hold on the road!

After a few hour drive, we arrived at our destination: a deep dive in the forest. In the parking lot were three cars, and a small cabin which had light. We went inside and found a table with our names, with directions to our cabin. A toboggan was also available, to help us get to our cabin by the paths in the forest.

A ten minutes walk later, we arrived at our Kabane, which was well perched and fairly close to the common house. When we got there at 6pm, it was already dark. We started a fire and went to the central house. Kabania is one of those places where important spaces are shared. Why have a private kitchen, when you can share a larger place, where everybody can cook?

The common house was really beautiful, entirely made of wood and glazed to the maximum. Inside, there was the kitchen, bathrooms and a large dining area where you can play, relax or party 😉 There must only be three or four other cabins to rent, because the room was not full. A relaxing atmosphere already prevailed. That evening allowed us to relax and prepare for the next following 10 days.

During the time we cooked and relaxed in the common room, the fire was quietly consuming in the stove of the hut. Laurent was feeding it logs every hour and a half. There was an indication on the stove, saying that you had to be careful because it was heating up a lot. It was true indeed … when it was time to sleep, it was a real stove! It’s amazing how such a small stove can warm up so much space!

Since we arrived late and got up late the next day, we unfortunately did not take advantage of the trails of the Ouareau Forest Regional Park, but the bit that we saw was worth a detour.

Kabania was a small luxury, which was nicely affordable. It is a small budget, but a destination to enjoy nature, if you give yourself time by arriving early and getting up early. Small idea that we found on the spot: it is possible to rent all the huts with a group and enjoy the place, for a weekend, surrounded by friends.