Saturday 13 of October, we meet Sandy and Jane, two engage women who are involved in the Cowichan Valley Transition Group. Sitting at the table of a small local café, next to the farmer’s market which takes place every Saturday morning, we explore through various questions the development of this transition group.

Presentation of Sandy and Jane

No weather condition scares Sandy, at 67, to travel year-round by bike in the Cowichan Valley. Even when traveling, folding bikes are ready for the expedition, for this year, the trip was made by cargo and then in bike, more than a dozen days of crossing the ocean with his spouse! She lives fifteen minutes by bike from downtown Duncan in a beautiful house that is as passive as possible. In an other article, we will come back to the arrangements made by her husband and herself, because we had the good fortune and happiness to share a dinner and a breakfast with them.

The same goes for Jane, who lives in the magical Cowichwan Bay, which was also the first Citaslow city in Canada, a movement born in Italy. Jane has experience as a facilitator and coach for individuals, groups and communities who want to build and navigate the transition in their lives or help them navigate the complex field of community collaboration. Her expertise is also fueled by a background in communication, care, environment and community development.

Climate change and depletion of our ecosystems are worrying our two activists. Following the Copenhagen Accord * in 2009, Jane did not see real policy changes and decided to act by herself at the local level, in the daily acts of life and personal choices. How to make a difference in this consumer society? Is transition a solution to make a difference?

Sandy realized after a having done a group exercise that consisted in writing her five priorities in life, that before the family, food, she was thinking about planet earth and her well-being . This awareness has led her to increasingly invest and engage in her community through various actions, various groups such as the zero waste group and the transition group.

Before asking a few questions about the Cowichan Transition Group, we also wanted to know what they thought were the good things they had seen over the last ten years.

According to Sandy, there has been a big step against GMOs and the whole movement against Monsanto.

For Jane, the work done with the First Nations is a great step forward. One of the particularities of the Cowichan region is that first nations communities represent more than 45% of the population. Now the first nations government and the province of British Columbia are working together on environmental issues, particularly the issues of water and food. For example, there has been a reintroduction of salmon into the rivers, which is one of the main foods of the first nations.

This is one of the foundations of the movement in transition: to start a group in a city, a village, a community it is essential to go to a training organized by another city in transition. 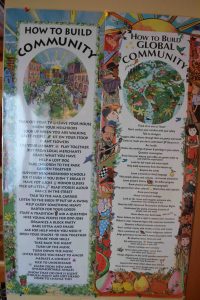 In 2010, there was a flagship activity that propelled the Cowichan Transition Group on 10.10.10. On October 10, 2010, a memorable day where more than 500 fruit and hazel trees were planted in public spaces with the help and participation of local organizations and residents. For example, the SPCA (animal welfare society) planted a few trees on their land. From that moment, they committed themselves to take care of these fruit trees. It is not uncommon to find fruit trees in church yards, community gardens … which are maintained by community volunteers, residents of neighborhoods. Most trees are still alive. There are only some that have been destroyed by deer or dried because they were not planted in the right place. This action was very relevant and consolidated a movement on the march, in solidarity, based on the good mood and the festivity of this unique moment.

It was also in 2010 that the Cowichan Transition Group developed a sustainable development charter with different organizations and signed by all.

In order to connect social and ecological issues, the Cowichan Transition Group proposed a meeting between environmental groups and community social worker to create a moment of exchange and sharing information sharing on issues of each groups. Sitting around the same table, they were able to share information about poverty and environmental issues. Through various meetings, a questionnaire was offered to residents of ten different suburbs to understand if climate issues were considered by them. He revealed strong interest and concerns about it. Following this survey, it was proposed to the population of these neighborhoods to set up collective and individual actions. To the great satisfaction of the Cowichan Transition Group last October, all the groups of people involved are still continuing theirs actions. The person in charge of this project presented the process and the first results to the municipal council. She asked for an additional budget to allocate to the project explaining the interest of continuing by showing that the social and the climate are intrasquely linked. Everyone must have their share of funding from the city council. This link was not obvious for some pearsons of the council and it shows that we still need education to bring around these social and climatic issues to our policits.

Here are some elements that we tell you about this meeting which allowed us to test also our questions to ask in future meetings and interviews. Jane and Sandy played the game, talking about them, their concerns, their daily commitment, which drives them. Providing us with keys of understanding, documentary resources to know, they allowed us to feed our reflection and to have had the pleasure to share a moment with them.

Questions to other groups

-What did you do that worked to engage people in your community in a sustainable way and you were not expecting it?

-What made new connections in your community?

Sandy and her husband created the Cowichan Local Lending Ares, a cash loan system to help local businesses start their project. These are individual loans offered by the community and each person who wishes to lend money to starting the business sets its own interest. This is how the first tea farm, Westholme, in Canada was able to start its business. It is a network based entirely on trust and communication and to date one hundred percent of loans have been repaid since the start of this system of monetary loan.

The Copenhagen Accord 2009: The Copenhagen Accord is a political agreement unveiled by a small group of countries, including the United States and emerging countries at the end of the 2009 Copenhagen climate conference. As it was not adopted by it – the 15th Conference of the Parties (COP15) to the United Nations Framework Convention on Climate Change – which merely “take note” of the agreement The Copenhagen Accord contains two appendices where the emission reduction targets of the developed countries) and appropriate national mitigation measures for non-Annex I Parties (developing countries). Although it does not contain any binding reduction targets, the Copenhagen Accord recognizes the importance of drastically reducing greenhouse gas (GHG) emissions in order to limit the rise in temperature to 2 ° C. It also plans for the immediate implementation of REDD + and the creation of a Green Climate Fund to mobilize US $ 100 billion per year by 2020. Source Wikipedia