View from the top

As we saw during the reading of chapter 1, peak oil and climate change cannot be seen separately. Since the beginning of our trip we talk about our approach and these imminent issues, it is interesting to see how many people feel concerned, but actions do not necessarily follow. There are many reasons for this, but one of them is that people do not think it can happen imminently.

«It’s for later, it will happen, but will not affect us, however, the next generations … »

In Chapter 2, Rob Hopkins tells us about the perception we can have of peak oil and climate change, but also how we escape intellectually with visions of the future where technological innovation will solve everything, to the other extreme, that is, the destruction of society. In order to explain it, he divides into three attitudes:

The adaptation scenario is unlikely for Rob Hopkins because according to planner Pierre Wack, they would rely on what he calls the “Three Miracles”.

The scenario of evolution as for him, cannot be functional, if one takes the change is global in the society and not only on the technological level. This is where the transition approach is positioned. Because although the scenario of the collapse is possible, it is against its possibility that the change must be done.

In 2006 the city of Portland (Oregon, USA) created a working group on peak oil, which produced a report entitled “Descending the Oil Peak” which evaluated the range of impacts that it could have. From there they drew three possible scenarios:

The reason Rob Hopkins talks about this report is that he quotes the psychologists Winter and Koger as saying that “healthy functioning requires faith in meeting our needs in the future, otherwise the credit we let’s give it to the world. A damaged trust can lead to four neurotic reactions that will probably affect our behavior in the environment: narcissism, depression, paranoia and compulsion. “

In highlighting the various scenarios set out in his handbook and the results of this report, Rob Hopkins explains that it is by explaining and recognizing the risks of each that we can help people to choose the transition for the future. Best of all. By opting for an adaptation of our environment to be more resilient and local, this is how we will be able to combat the adverse effects that we would have to continue heading on.

Why the energy descent

Like the degrowth movement, the foundations of the transition movement lie in bringing about an energy descent from our way of life. It is in this principle that the initiatives of transition are above all an ecological movement, at least at the beginning, because the goal is well to make our way of life more durable and in harmony with the resources on the ground.

There are many reasons for the need for energy descent, as Rob Hopkins discusses in the chapter explaining the concept of Energy Return on Energy Invested Energy (EROIE). which is the ratio of usable energy acquired from a given source of energy.

Not present in the chapter, but I take the liberty to add it, one speaks now of the Earth overshoot day, that is to say the day of the year or the humanity to use the set of resources that can produce the land in 1 year. Every year on the date which it falls approaches the beginning of the year. In 2017, we are currently at August 2nd. The Global Footprint Network offers many interesting resources.

The term energy descent is chosen according to Holmgren, co-founder of permaculture for the less negative aspect that it conveys rather than the degrowth, but one can also speak of the Sober Happiness of Pierre Rabhi or the Buen Vivir South American.

The energetic descent of our way of life is important because oil, as energy slave, was the one with the best yield so far. Renewable energies are a solution, but they can not support the weight of our current consumption. The figures of the EROIE at the time of writing the book (2008) may have changed, but represented: the wind of 11: 1, photovoltaic cells 2.5: 1 and hydroelectricity of 23: 1.

Finally, the importance of putting forward the concept of the energy descent is to stop focusing on the peak oil, but to put importance on his after and the social issues that the greatest difficulty to acquire energy will bring. 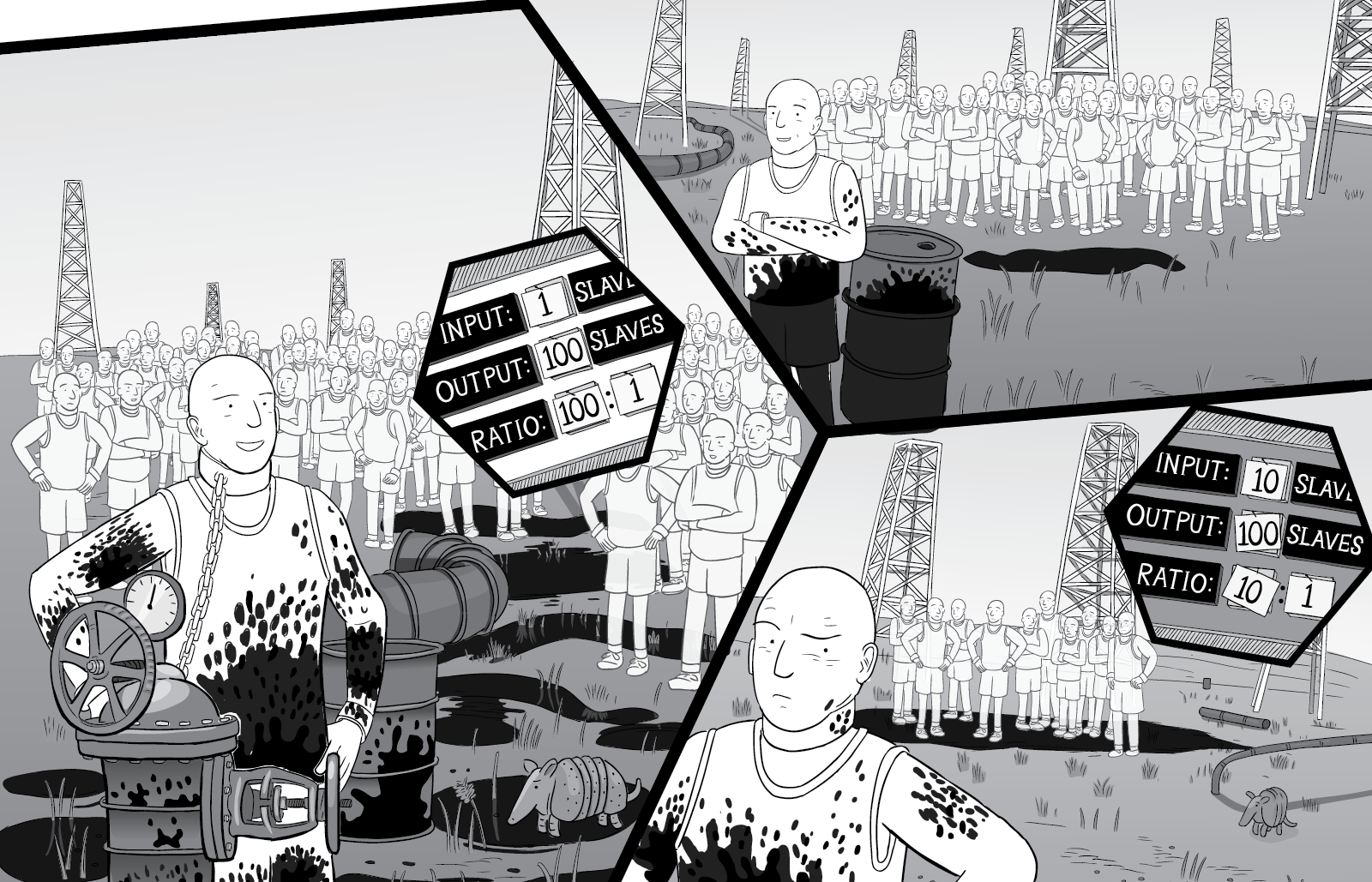 While doing a search for an image on energy efficiency, I came across the site of young designer, who puts online his comic books on ecology. There is one on peak oil and energy slaves. It is free access and in several languages, I advise you.