We were in the city of Berkeley for 2 weeks to visit the local transition group. They are very involved in community gardens and have spoken to us several times about a farm that was on the field of the university. Is just after a whil, that we did not the connection with a documentary that was screened while we were on Vancouver Island. This is how we went on a Saturday afternoon on a field named Gill Tract Farm. The farm was about to close, we were able to talk to Richard the coordinator for medicinal herbs garden, he advised us to come back the next day, on Sunday, there will be more people.

It was a good advice and an inspiring moment for us. Like many times in the trip, we think that if we had more time, if we had been there before, we would have spent a few days with them.

You can listen to it in our video below, as well as on a DVD that was made on the occupation (see Occupy the Farm website), but this land has a great history. In 2014, at the earth day, a march have been organized and more than 300 people occupied the land, as a result it became a farm instead of being paved and turned into a parking lot. The space had always been agricultural land, but for university research and there was a desire to make the land something more lucrative for its owner; the famous University of Berkeley.

A garden for the community 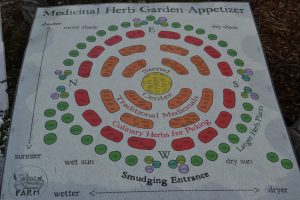 Since then, part of the land has now become a garden occupied by university students. Collective garden, community, experimentation place of urban agriculture, learning permaculture, but also a garden for the community that surrounds it. Although owned by the university, the garden is managed by the surrounding community and the students who participate in it. As a collective garden, when you volunteer, you can harvest, but much of what is produced is distributed free to those who need it. 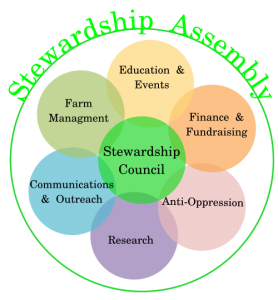 The garden works by consensus, based on a horizontal democracy as possible, it is a place of learning to export this knowledge in the outside world. It is a whole community that participates in the various tasks to make the garden work. Many events and workshops take place there.

Following the occupation, the university in order not to continue the bad press that it received has reached agreements with the community, but these end in 2022. The enthusiasm is present and wants to be transmitted so that the place is always occupied and by more people, so that during the renewal, the university is not the choice.

So now it’s the time to present you the video, the first one we do since the beginning of the project. We did the subtitles in French and English, you can choose to put them or not.