On the road, we tried to meet local currency projects, unfortunately time made its effect and older projects have not resisted. The Toronto Dollars ended in 2012 due to lack of use, the one in Vancouver did not meet great interest, while the Calgary Dollars we met ran out of steam and tried to redefine itself in order to find users.

It is therefore with great interest that we headed to this small island which in addition to having a local currency, have also a transition group and a strong tradition of production and local consumption. We will have finally spent 3 hours with Michael Gallant, President of Salt Spring Dollars.

The story of the Salt Spring Dollar begins in 2001, three men, including an accountant, dentist, and real estate agent founded the local currency to bring more awareness to the island, its local artists and to emphasize the importance of local spending and local self-dependence. In British Columbia, island are rules by the island trust, wich is an administration outside of the island, the idea of a local currency was also to claim a more local administration.

Like most other Transition Town currencies, Salt Spring Dollars enters circulation when purchased for Canadian dollars on a 1:1 basis. It is currently accepted by a number of local businesses, including all three grocery stores, the local hardware store, and the pharmacy. Legally, it is considered no different than a gift certificate. The money used to expire, but since the BC government changed the laws pertaining to gift certificates, the expiry dates have been covered over with a gold security bar.

Initially there was no redemption fee, and it was redeemed by the three major banks on the island, however, since the introduction of a 5% fee on redemptions to encourage local re-circulation, currency is redeemed at 95% of its value directly by Salt Spring Dollars. The 5% administration fee is used to cover administrative costs, and to encourage businesses to re-spend the money locally.

The introduction of the 5% fee however, did result in lower acceptance by some merchants who had become accustomed to the 1:1 ratio; however, the disadvantage of such a system is that the money exits circulation too quickly when businesses redeem the money each night with their deposits. Instead local money should be used to substitute the purchase of local goods and services, thus keeping the money circulating locally. This unfortunately hasn’t happened. Some consider the fee as a cost of business, while other businesses stopped accepting the currency, complaining that it was higher than the 2% to 3% they are paying for credit cards and that it is too inconvenient to buy local themselves.

It is possible that if the 5% had been put in place, and businesses had been better educated on the collective benefits of them spending on local goods and services it may have allowed for a broader acceptance. 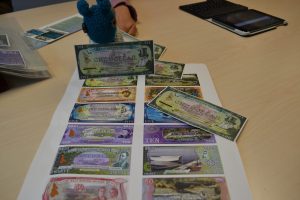 When talking about local currency the first time to someone, the question about security is the one that comes up quite often. The Salt Spring Dollar is not an exception and has several security features on its banknotes, even if according to Mr. Gallant, it is mainly there to meet the psychological needs of people. In over 15 years of existence, there have been no cases of counterfeit. We can find a watermark and a serial number on each of the notes, as well as custom gold foil overlay which would be very difficult to duplicate. Many new security mechanisms are available today which make these obsolete and much less expensive. Though Salt Spring Dollars is printed on high quality artist grade paper for a traditional money feel, the introduction and acceptance of the new polymer bills, makes for a durable and lower cost product. However, one advantage of paper is the ability to print locally, thus increasing self-reliance.

Salt Spring Dollars were available for a period from a bank machine located in the lobby of the local Island Savings Credit Union, which legally operated as a Point of Sale vending machine. This has had some success, but changes in security standards have forced them to take the machine out of service. The organization hopes to put it back into service in 2018. One unique feature allowed customers to choose from a list of community organizations to receive a 5% donation from Salt Spring Dollars.

Currently: A currency of substitution

After 15 years of existence, the Salt Spring Dollar generated about $150,000 in unredeemed currency that was redistributed into the community, used for administrative, and marketing expenses. Though this sounds like a lot of money, it is very small in relation to the size and affluence of Salt Spring Island’s economy. Additionally, the organization is run entirely by volunteers, without which the currency would cease to function.
The main benefits of a substitution currency like Salt Spring Dollars is to encourage local purchasing- it is a voluntary transfer of purchasing power to the community and demonstrates a commitment each time a Salt Spring Dollar is spent. Yet it is a very much a symbolic gesture and those that already support local may feel no need to use a local currency to do so.

One key obstacles has been the shift to digital money by consumers and modern banking facilities by businesses. Most businesses have book keepers that pay employees and local venders by cheque or direct deposit. Customers likewise find it convenient to pay and track expenses with debit and credit cards. Asking businesses to try and pay vendors or employees with cash has been an uphill battle. Asking businesses to give customers change back in Salt Spring Dollars was tried for a period of time, but businesses found this to be too cumbersome. Staff turnover is high and educating customers about local currency at the point of sale was not a realistic expectation to put on businesses.

Salt Spring Dollars does have a website where you can buy purchase the local money as well as their ½ ounce fine silver coin which was hand struck at Lasquiti Mint. They sell a small amount online to local currency collectors and start ups. According to Mr. Gallant, it’s a lot of internationnal buyers, numismatists, others interested in local currencies, Currently, only about $1,000 a month is traded in local shops.

Despite the currencies challenges, Mr. Gallant is optimistic about the future of Salt Spring Dollars, and sees a pathway to develop a model local currency. He is currently investigating systems to add a digital component with many

of the online banking features that customers and businesses are familiar with, such as online transfers, online invoicing, smart phone transactions and paper transfer forms akin to cheques.  The paper dollars would still be used for point of sale transactions, because all retail digital POS systems are still closed and proprietary. They are also exploring the ideas of mutual credit, backed by local food and other local goods and services. Such a system, if implemented, would need to cease the Canadian dollar redemption, but could conceivably circulate a far greater value than has traditionally been possible. The foundation of having had a functioning local money system for the past 17 years should make the adoption of such a system more likely, than a group starting from scratch.

The challenge, as in all new ventures is that an investment of time and money is needed for implementation and outreach, and it is difficult to find funds for new currency systems. A Transition group exists on the island but has no relationship to the local currency organization. Could the existence of this currency be enhanced by the greater involvement of citizens in order to transform into a replicable and sustainable model?