The first time we heard about it was in Ottawa, our host told us the city had just finished the first complete street. A street that was suitable for all users; pedestrian, bike, bus, car. It is during our visit to Pasadena, in the suburbs of Los Angeles that we have the chance to learn more by attending a meeting of Pasadena Complete Street Coalition.

The disadvantage of American cities, unlike European cities, is that for the majority of them, they developed after the Second World War. The economy at that time was booming, and there was a consumer good that was very fashionable: the car. In urban planning, the consequence that this has had is to provoke what we call urban sprawl. It was so easy to take a car and drive miles to a store, then you could live far away from the city center and have your home with a garden. Except that by doing this, everything was far away and it was no longer adapted to a pedestrian scale.

It was in 1971 in the state of Oregon that saw for the first time a policy approaching the vision of Complete Street. There are now 16 states and more than 490 jurisdictions in the United States that have adopted such policies.

In 2004, the National Complete Coalition was born, launched by Smarth Growth America and other American advocacy groups. The goal of the coalition is to promote and develop policies and practices that promote street accessibility for all. 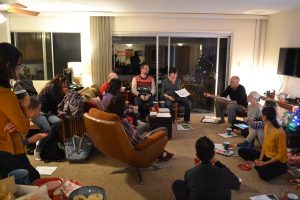 The group of Pasadena Complete Street Coalition was born in 2013 after a year that saw the death of several cyclists due to accidents with motorists. We were about fifteen in the apartment and as many bikes on the balcony. While the transition groups we saw were often older, the PCSC did not have a typical profile; students, employees, retirees and a near parity male women. An active group that is mobilizing to make streets safer for cyclists and pedestrians.

At the meeting one of the coalition members recounts his second experience of the bicycle repair shop. By offering this free service to the community, members of the group want to promote active transportation. They also organize bike rides and public activities to talk about urban redevelopment to the city residents like at the Park(ing) day.

They discussed that the city of Pasadena is planning a redevelopment of the city’s main boulevard to increase security. The group is campaigning for the project to take into account the various road users, but also so that the boulevard is not the highway that it is, but a destination where there are local businesses.

The PCSC does not work against politics, but with, in order to build something. This is where the American vision makes sense in the culture of lobbying, it is important to try to convince rather to militate against. Present in various meetings of the city about redevelopment projects, the goal is to make an act of presence, to testify and to propose. Whether with the city, but also with the citizens. Promoting access to the streets for everyone has several benefits: for health, safety, but also for the environment and the economy. By making sidewalks more suitable there is less risk for pedestrians and the same goes for protected bicycle paths that reduce accidents. It can also be to reduce the speed of motorists on certain axes. Active transportation is easier, more citizens adopt this way of life and it increases public health by doing these exercises.

Active transportation is less polluting than the use of an individual car, studies show that cities with a strong CSP policy, greenhouse gas emissions reduce. Finally, streets that are more accessible and safe promote a healthier local economy. There is no longer need to use his car to make a long distance, shops nearby reappear. 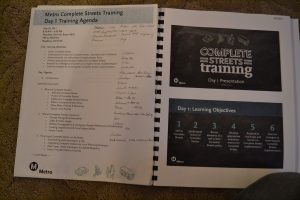 One of the members of the group had just attended a two-day workshop offered by the Metropolitan Transportation County of Los Angeles. It targeted city workers in particular to explain the Complete Street vision, its necessity and how to think this vision with the citizen. It was impressive to see the notebook provided and how access to build it together was important.

The visions and goals of the complete street program can only be encouraged. Advocating for active transportation more present in our cities to put everything on a local scale is essential for the environment. That cities and citizens work together to make these changes is a need for a return to a more active democracy. It is not possible to continue to make superstores that requires to take a car or spend 1 hour in a transport. It is the citizens of the cities where changes are made that are best able to know the needs of a neighbourhood. It is not necessary that the person of the city is a decision maker, but a facilitator for the consultation and a technical assistance to the realization.

We must not simply stop at cities and urban centres, this planning work must be global in order to facilitate the flow of everyone in respect of environmental and social needs. California Transportation is a state government agency that focuses on this vision of complete street by creating a toolbox, yet at the same time building a new highway that destroys farmland and forests while there is already one.

Although the North American situation of cities is different from that in Europe, the mode of operation of the CSP can only be to export and work together with the vision of the transitional movement.

If Complete Street interrest you, you migth want to go on this website, National association of city transportation you can fin a lot of pdf and guide on how to advocate it.

Looking for Canada, I found the website of Complete Streets for Canada, that shows a map of cities with this policy.