Imagine finding yourself alone in a burned forest where grizzlies live, a 50 poounds bag, your car 5 km away and some 500 meters lower; you must surely be a mushroom picker. 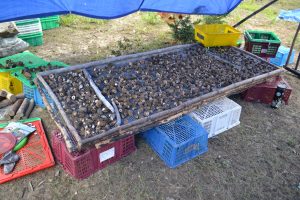 In 1858, British Columbia was founded as a result of the Fraser Valley Gold Rush, but the forest industry is now the heart of its business. In between the Rockies and the coast, this Canadian province is a huge forest. A boreal forest that needs to burn to exist. Some trees sow their seeds in contact with fire; pine casseroles burst and use the richness of burned soil and ashes to grow. In this natural cycle, not only trees grow, there is a particular mushroom which grows on the freshly burned lands of the preceding summer; the fire morel. While in some parts of the world fresh morels are growing in small quantities, tons of fire morels can grow on a burned boreal forest. 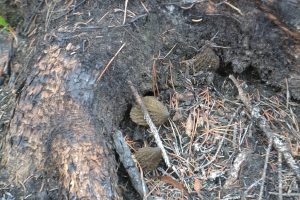 The mushroom industry generates millions of dollars in western Canada, with hundreds of people walking the miles of burned forest every year. In the spring, mushroom companies will go through the fires of the previous year to determine which ones will be best for a good harvest. In the 2017 summer, British Columbia was ravaged by huge forest fires, the largest ever, reaching more than 2,000 square kilometers for some. With a GPS, a  frame pack, a knife and a seal, it is in the Rockies, between Alberta and British Columbia, that I was going to learn to pick mushrooms.

To grow, the morel needs mother nature to provide adequate factors. Water is needed to feed the mycelium, but also sun and heat so that it can grow. A dry or cold weather, even on a good ground, will not allow the shoot.

Choosing, the good forest fire is essential in the picking, it is the advantage of being with a buyer, the company will have done beforehand this work of prospection. The fire must have occurred sufficiently late in the year so that the vegetation can not regrow before the winter freeze. The forest must also be mainly coniferous.

Being in the mountains, the season will have started at the bottom of the valley at about 1300 meters to finish in the heights at 1900 meters. The same principle works at the land level, it is possible to start the season further south and to finish it to the north, there are morels from California to the Yukon. The sunshine of the soil will also have a great influence, on the fire where we were the mushrooms grew mainly on the east side.

In the same forest fire, the intensity of the fire is not the same everywhere according to the ground or the temperature at the burning time (a fire can last days, weeks or even months). Sometimes, just the soil and the base of the trees will burn, sometimes the forest will be nothing but ashes. Depending on the time of year, the fire morel will not grow at the same place.

Depending on all these factors, a day of picking can bring in between 0 and several hundred dollars. Finding the right place, knowing where to look, being fast, and having a good deal of luck can make a walking day a rewarding day. It is necessary to be ready to live an experiment of autonomy of camping for several days or weeks, the season is short and it is necessary to be able to benefit from every possible day. Before arriving to the camp, we needed to drive about 80 km on a dirt road throught the forest.

Kitchen, toilets, teepee for rainy days, it’s home for more than a month. Camp life is punctuated by working days, the sale of mushrooms and even parties around the fire. Between departures at 6 am and return in the afternoon to relax, those who decide it’s a day off or those who leave more than 12 hours, each one manages his time as he wishes. The principle of picking is that at the end of the day you can sell them to the buyer or keep them for you.

The buyer, often one per camp, is the field relay of the company. He is responsible for buying the mushrooms at the pound and storing them. Then he sells his mushrooms to a dryer, who often has a team of several buyers. The stage of drying the mushrooms is important because if the work is not done well the mushrooms will rot. Last step of this trade, the dryer will then sell to the company that will put the product on the market. At each transaction, everyone takes his share. The price of fresh morel varies a lot depending on the season and the abundance of the product. In general the price will be high at the beginning, because the stock of the past season is over, then will fall in the middle of the season because many mushrooms will be on the market.

With so much step, the difference in mushroom sales between the picker and the public is enormous, some will decide to dry the mushrooms themselves and sell them directly to restaurants. Small calculation; the price of the fresh morel pound was $ 6, when a morel dries it loses 9 times its weight. 1 pound of dried morels is equivalent to about 10 pounds of fresh morels: $ 60. The sale of a pound of dry morel turns between $ 150 and $ 200. 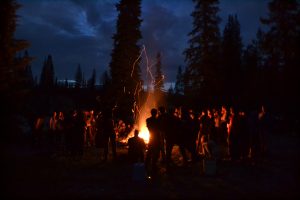 In the field, picking mushrooms is not a team effort, but once in the camp is the collective life. Not a team work, because it is not possible to pick everything at the same place, having his secret places and know how to find them is the strength of experienced pickers. Having physical stamina to walk for several kilometers, sometimes with more than 60 pounds on your back, climbing over tree trunks and climbing mountains, that’s also the difference at the end of the day. Being able to spend the day alone while being alert of the dangers that the Canadian forest is full of is also part of the game. Many have been charged by a grizzly, you have to know how to react. The terrain is not always a fun part or risk. In spite of all that, it’s probably the nicest thing I could do.

Why ? Perhaps for all the reasons that make it difficult, but also quite funny, a personal test and that being immersed for a long time in nature makes you understand how one went away from it. To be able to walk where perhaps no one else has walked, to have only the sound of nature, to drink directly from the water of the glaciers.

It is interesting to note also the diversity among the pickers. There are locals, those who come during their week of vacation or weekend because they live near. But there are especially those who come to make the entire season. An international horizon of people who come, for a time, to take walks in the forests of Canada. A long-term traveler’s profile, aiming to a different life, away from the metro-work-sleep.

For one or two months, hundreds of people come to gather the fruits of the soil in the forests. The money generated by this business attracts more and more people. However, we have not yet been able to answer if this harvesting is good or bad for the soil. The functionnement of the mycelium and its importance with the soil is not yet fully known. By picking all these mushrooms we do not come to damage a soil that regenerates itself? There is a difference between Sunday family activity and those thousands of pounds that are pulled out of the ground.

Walking in the nature, knowing how to observe and recognize it, can pick what you need. If the activity on a commercial basis can raise questions, it is necessary that we redevelop it on an individual basis.