When we contacted the local transition group, I was told that it was unfortunately dormant, but there were other initiatives that were worth seeing. So we went to Tulsa, an urban area of ​​about 1 million people in the state of Oklahoma. Our hosts, Rick and Karel, introduced us to two people with projects related to agriculture, including food forests. 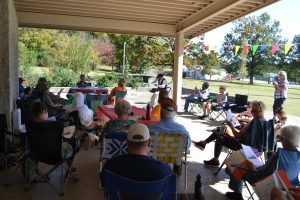 If you have been walking in a forest, you may have noticed: a forest does not only have big trees. We are used to our parks and gardens to have a piece of grass and immediately to move to very high vegetation. Nature does not work like this, the vegetation size is progressive between two ecosystems. Food forest projects, also known as forest gardens, will reconstruct this natural aspect of the forest containing several types of vegetation.

We followed a workshop on food forests donated by James Spicer at an activity at the Challenger 7 park community garden. In his explanation he separates the types of vegetation into 9 categories according to size or function. First there are the bigger ones, the nut trees or the fruit trees. Second is the smaller trees, often small fruit trees. Next coming in order; woody vines, shrubs, herbaceous vines and finally herbaceous plants. The last three groups are the nitrogen-fixing plants, the other plants and finally the mushrooms. 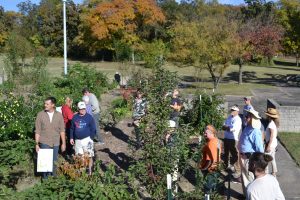 A forest garden is a way of recreating an ecosystem, but also providing stuff for several needs. It can be to heal, to live, to feed, to build, etc; the planning of his garden must be very clear and coherent so that the different species help each other as in nature. The size of the trees will be as a result of the sun, we do not put the highest to the south, otherwise the sun will not go to small. Some plants are companions and grow well together. If you know the model of permaculture, the feeding forest works on the same principle. 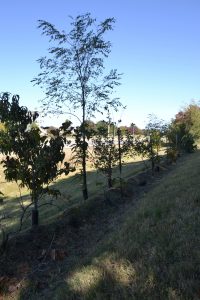 Then we made a visit with Nathan Pickard, who will make us notice that in the cities, we never plant fruit trees. Sometimes working with the city of Tulsa he has already heard how “waste” (fruit) trees make dirty when they rot on the ground. We planted trees for the decorative aspect, there is now an environmental awareness about why a city plants trees. There is still a lot of work to be done before we can see hazel trees or apple trees along the streets.

Multiple projects person, Nathan and his association Restorative Collective Tulsa have the project to create a nourishing forest behind his home, along the highway. Normally highway are managed by the state, but this portion is managed by the city and after having thwarted the workings of the administration, it is more than 500 trees that have been planted on about 1 km. From a single row behind his house, this goes up to 3 rows of trees in larger portions. The project aims for inclusion, to fight against food insecurity, eventually, once the trees yield fruit, it will be aimed at poor people. It is also an educationnal project because the emphasis is put on the younger ones to take care of it. The initial work of planting has brought the kids from the school next door, but Nathan is taking care of it most of the time for the moment. 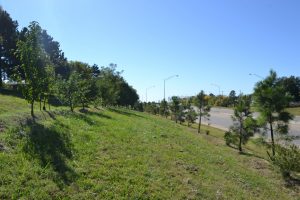 Planting trees has other purposes, it will also reduce the noise impact of the highway on residents. When they have planted the trees, the group also dug swales. For 2 years since the project started, it never needed to be water and they are in the state of Oklahoma. When walking on the ground it can be noted that the soil is softer in some places, the rainwater is harvested and drained through the slope. Walking around we saw the formation of a small pound who was not there before Nathan told us.

The project is still young and Nathan Pickard hopes they can plant more, the highway is long.

Nathan’s children attend the neighborhood public school, which is Oklahoma’s only public Montessori school. When it was time to redo the landscape of the school, he and other people managed to get the project to build a permaculture garden and a food forest. A foundation was created and the project was born. We visited the place whose concrete construction has just finished and it is now the beginning of the garden phase. The space will serve for the education of children and will be an incredible edible. Unfortunately, it is not possible for the food to be in the school canteen because it is a subcontractor who manages this, there is still work in prospect.

Nathan had a popular education project using his garden, he made it a nourishing garden according to the model of permaculture. This is not the first one we see, but it’s always a pleasure to see this kind of project. We visited his garden while the controversy of the front gardens in Quebec City was in full swing, we thought there was some way to go. For the pleasure of the eyes here is his garden.